The movie ‘Lives of others’ was brilliant in its depiction of life in East Germany under the watchful eyes of Stasi, the dreaded and repressive state police. These guys collected information about people whom they suspected of having anti-state (or ‘pro decadent West’) leanings in an almost obsessive compulsive way. Every aspect of the ‘suspect’s’ life was covered. At the height of Cold War, Stasi probably spied on more than a third of the population and collected astonishing amounts of information and data about them. But none of the information and data could prevent this from happening. 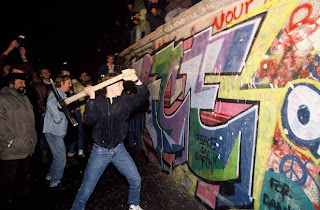 Emotion trumps data, any day. And emotions cannot be predicted. Behaviour, linked to emotions, even more so.

But brands don’t seem to believe in this. They are going to town with their ‘investments’ in big data and analytics. They probably see in data and analytics the answer to all the problems the brand is facing, a holy grail. Data is something absolute and finite. It gives the marketer a sense of control, a sense of being ‘scientific’ in their decision making. It also helps them justify any decision, more often than not, the wrong one. And their favorite game, Analysis-Paralysis, gets even better with big data.

But big data can also give interesting insights leading to interesting stories if one knew where to look. But I doubt very much whether that will happen.  Maybe, they should look at this interesting case for small data.

“We have jumped on the data bandwagon to such an extent that we’ve seemingly forgotten how normal human beings respond to stuff.

Instead of using the findings and learning’s of data to create stories that have emotional value and meaning to our audience, we are now seeing more and more ads that basically regurgitate the data as the actual message.”

The tech industry which made big data fashionable has also been a victim to its distracting powers.

One of the most loved brands of the dotcom era Yahoo is now on life support. One of the reasons for this sorry plight was their over-fascination with big data (and analytics) through their investment in Hadoop. This obsession with data meant that their attention was diverted from doing what is fundamental to their business – creating a wonderful user experience.

Google, the tech giant, prides itself on data-based decision making as one of its cornerstone of its strategy. Can someone explain to me why then are they tripping almost everywhere except in their bread and butter, Search? Be it the buyout of Motorola or their ‘Facebook’ obsession product Google Plus, Google seems to be losing their mojo. I hope they do not wind up like Yahoo.

Therefore, it is not surprising to see comments like the one below on a recently held conference on big data involving the usual suspects.

Lastly, one of the biggest names in the telecom world continues to sink faster than a guy with cement shoes in water while their investments in big data and analytics continues to grow. The only solution to their plight is ‘Change’, beginning with the management. But then data and analytics cannot help in that. It requires something that is rarely used these days. It is called common sense.
Posted by V.Subramaniam (Subbu) at 12:34 PM